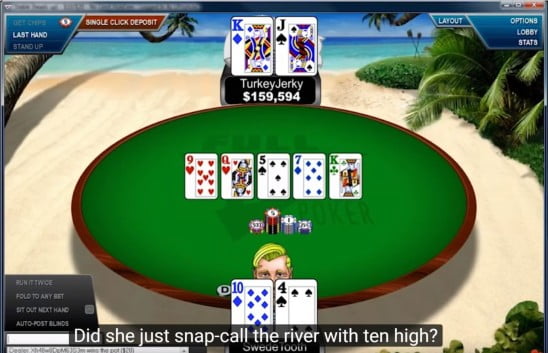 Tilting. The age-old Achilles heel to many promising poker players. Again, I was surprised that the BeastsOfPoker-team asked me to write about this subject, and again I was reminded that people probably want to hear of the subject from someone who actually has some experience on it. If you’re unfamiliar with my near genius level of articles feel free to read the one about bankroll management bankroll management. These subjects are somewhat related to each other as bankroll management and tilt often correlates. Meaning: bad bankroll management usually leads to bad tilting.

What is tilt in poker?

I’d define tilt as a play or series of plays where players mental stage prevents him or her from making the optimal play. The type of tilt varies depending on the player. Some of us go to the aggressive “I’ll win my money back no matter what, if they can outdraw so can I” type of mode, while others go to passive “I’ll lose anyway so I just checkback these nuts because it’s going to cost me less when they outdraw me” mode. To some it’s something in between.

I can only speak for myself but for me it’s like a weird burning sensation. And no, not that type of “burning sensation”, this one happens inside your head. It’s loud and irritating, you feel like you’re losing control of your actions (which, you in a way, are). There’s a small feeling that I should quit the game and go do other things but a huge need to get back to breakeven or to the point I was in all time high in. So, I tilt even harder to the fact that I’m not quitting the game, which leads to non-optimal plays which then again tilts me even harder. It’s a vicious cycle.

How to prevent tilt in poker?

Make sure that you have slept well, are in a solid state of mind and if possible; exercise before the session. When you get outdrawn for the fifth time in fifteen minutes it really helps to have that after exercise dopamine in your body. My A-game comes from a state of mind that I’m only observing someone else’s game, so I might also meditate to get to that mindset.

In the real world though: a lot of my tilt preventing is just picking when I’m in a bad mood and decided to take the day off. Having a hangover, feeling sick or sleep-deprived (or all together) is already bad enough, trust me: you don’t want to add a losing session to that. That’s how you end up with a life tilt.

Now, to be honest. I’m not even entirely sure if other players have these, but as I do, I think it’s crucial to write something about them. Life tilts are a form of tilt that lasts weeks or even months. They’re usually triggered by an unusually brutal run and/or series of bad decisions. For me it goes something like this:

I have been losing for some reason or another. As my downswing grows larger, so grows the playing hours. I check my results: -30 buy ins from the last two weeks. I feel frustrated and angry, but more than anything: I just need to get back to an all time high. It’s an uncontrollable urge. It’s almost everything I can think of now. I add a couple more tables, so I get hands faster and forget about day offs: I just need to clock as long hours as possible to even out the variance. No time for exercise or sleeping either, I just must play, all the time. At some point thought pops to my head: “I could easily get it all back if I played higher”. And of course, I’m not in the right state of mind, but what does it matter? We live in a biological space-rock falling through nothingness so what’s the point of anything really? Just tag one of the weaker regs as a fish, so you have an excuse and boom. Justifiably sitting 5x your regular stakes. Just brilliant.

Now there’s two possibilities how this might end up;

It’s possible to recover from a life-tilt in theory. But, I’d guess that most people don’t, so if possible – don’t do it. Immediately when you’re having thoughts that “you have to do something” – take a break. Otherwise it might take months or years to recover and you probably won’t be the same. For me, recovering starts with a break from the games, studying how to play poker with the right strategies off tables, and exercising regularly.

Remember: Do not raise the stakes when in a downswing. If the game is really “the best there has ever been or ever will be” -which it won’t be but no matter – someone will be willing to buy a piece of your action (if you don’t have anyone feel free to send me a message on our Discord). Bankroll management should always be your priority. Especially during harder times. There’s no shame moving down in the stakes – it’s actually respectable. It shows that you can handle this game. Every great player has at one point moved down stakes – only to move them up later on.

How to notice tilt and what to do about it

As a rule of thumb, you should be very conscious of what’s driving you at the tables. If it’s something else than “I want to make the optimal play” or “I want to enjoy myself while playing” you should be very careful. Remember that you never “have to” do anything at the tables. You never have to take a certain line with a certain hand or keep playing if you don’t want to. There will always be good games in the future! And, even if you’re opponent seems bad but is winning a lot, keep the old poker-saying in mind: “You might be better player than all the rest in the table but when you’re losing – they are winning. And by default, winning players tend to play better than losing ones.”

If you notice tilt, just quit – it’s the right thing to do.

Don’t keep playing if you notice tilt, or you might end up like Rose in Micros Episode 2!

I know that the examples I have given in this article are extreme. But, as they’re my own, I know they can happen. Tilting is an issue that affects most poker players in some way. You might be not as extreme tilter like yours truly (used to be), but no one plays their best possible poker all the time, especially during a brutal downswing. To remain rational in the darkest of times, is a virtue given to a lucky few – to the rest of us, it’s a skill we must learn. Playing some other games to clear your head might also be a good idea – we recommend trying out Starcraft 2 or Idle Arena – Clicker Heroes Battle!

Keep those heads calm! See you at the tables.

Become the player you were born to be and start dominating the games – Continue reading more tips & articles in Poker Articles!

Samuli is a long time mid-stakes cash-game professional with two SCOOP titles, Aussie Million title and partypokers monthly million title on his belt. He is the writer of the nominated Gambler’s Diary.