Song playing in the background: Dire Straits – Money For Nothing

It’s 2020 and the theme of the poker year is locked for my poker playing character, that little nerd inside me that wants to figure out everything but has failed in implementing his strategies at the tables too often. In the heat of the battle your fears and monkey mind sometimes take over, and that’s gotta change with this new theme. Come in drum roll…

True, it’s a bit of a letdown since it’s not all that exciting. But, neither is the Cadillac of Poker, No Limit Holdem – at least for the most part. I mean it’s exciting when you play a hand that develops into a huge clash – in between its just hours of grinding tiny edges and folding all over again.

So, the theme of 2020 for hero is having no spews. Solid riding all the way, I like the sound of that and that’s what we’re sticking to day after day until its Day 365 of the journey.

So far it’s been 9 days with consecutive sessions and we’re already doing quite well with just a few too loose preflop punches, but deliberate practice will make perfect and removing those old bad habits is just a matter of repetitions. If I want to realize my potential in poker in the limited time I allocate for playing, I must truly be motivated by best decisions alone, not the excitement and fun of it. So, the plan is to play like a professional with monk-like discipline with amateur hours and pretty averagish skills.

In the beginning of the year we’ve been trying our hand in PLO a bit, but NLHE is still far more profitable for me in terms of risk-adjusted returns due to preflop equities running so close to each other in PLO. A few towers built from 200eur starting stacks during second week of January:

The first poker trip of the year will in February for me, which is a good milestone to keep me inspired & motivated. Until then, this blog will be about random updates mostly about maintaining the theme of the year and focusing on the mindset stuff.

But fear not, February and poker adventure is just around the corner. To be continued… 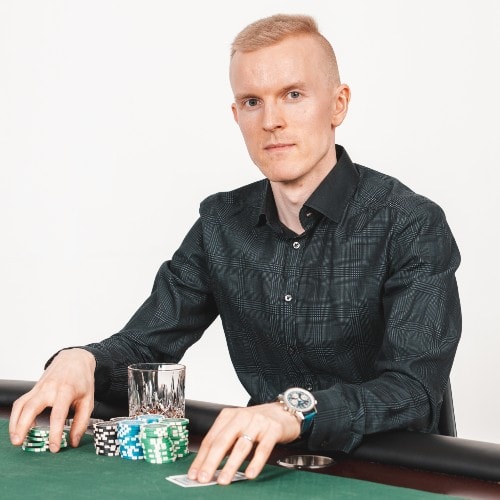 Johannes is the Editor in Chief at Beasts Of Poker and is an expert in both live & online poker. Johannes played online poker semi-professionally for 5 years while completing his Master’s Degree in Technology. He has also worked as a trader for a private sports betting syndicate and consulted numerous affiliate companies in finding new revenue sources.

Johannes takes care of all writing and research being of utmost quality here at Beasts Of Poker. He is also closely in touch with poker operators on a weekly basis to ensure the players have the latest promotions and bonuses readily available.

As a recognized expert in the field, Johannes has published his work on numerous industry publications like PokerNews and Poker.com and was nominated in the Hacker Noon’s annual awards as a candidate for Contributor of the Year in Gaming in 2020.

All feedback and ideas regarding content at Beasts Of Poker can be sent to my email.