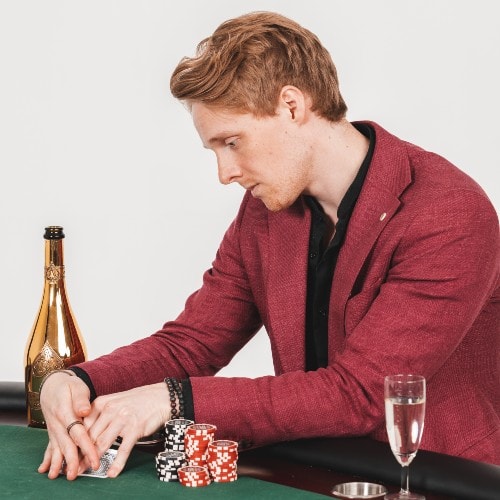 Waiter brought the plate with some bread. With very broken English he said: “You dip la pan with dis”, smiled and walked away.

“Did he just give fucking instructions on how to eat hummus?”

“You’re clearly in a good mood. Glad to see that this losing streak doesn’t affect you at all.” – Pampo

I didn’t respond because he might’ve been right. Fasting for 16-hours a day and losing to insanely soft live games for four nights in a row could theoretically alter my mood a bit. The waiter did demonstrate how to put bread in one’s mouth though. What did he think of us? Not too much clearly. It was obvious that to his eyes we were men that had to be told how to eat a fucking bread. Does this waiter not know of my genius? I’m not a man who need instructions, I am a man who makes the instructions. To what you ask? TO THE WORLD.

I started chuckling. Glad to see that Mad King was still doing alright. And people think that I’m calm. Fuck, I’m probably just one weird accident away from becoming the next Marvel super-villain.

“You alright?” My friend asked.

After lunch, as we walked to the casino the city felt like a beautiful hippie chick (all cities are ladies). Smell of weed, food, the sound of foreign languages and scorching heat on my back took me to my memories.

Seven years ago, walking away from the tournament area. Tilted, and talking to myself:

–How the fuck can he call me with that?

–Fuck off. I had to with that combination.

–You think 65-years old Spanish guy is going to care a lot about your “combinations”?

“Tssm” my phone vibrated in my pocket. As I’m taking my phone out there’s a stack of money in the way-10,2k in 100-, 200- and 500-euro bills, all of them to just slammed together in one disorganized bundle. “Hey man we’re out, join us in the bar next to the casino” – a friend’s WhatsApp message red.

–You have too much money with you. Take it to the hotel.

– For fucks sake. Okay, but at some point, you need to take all that cash back to your room.

I join a group of famous poker players. There’s so much liqueur on the table that I’m afraid that it might fall over.

“Hey man, great that you could join us,” one of them says to me.

“Well, this might help you a bit” he says and points me to their shot- table. The table was rather small but on top of it were a tray with around 50 shots.

They just get me.

Next couple of hours is filled with aggressive drinking. I have a few flashbacks from the bar, one from what I assume is a strip club and then nothing.

I wake up to someone massaging my inner thigh. I open my eyes. Some old man is feeling me out.

“What the fuck are you doing!” I shout at him. Without realizing what’s happening I grab him and throw him to the ground. I look around: the sun is out and I’m in a park. I must’ve passed out on the bench. I put hands to my pockets – the feel of money bundle calms me down a bit.

“So, can you explain what you were doing?” I say a bit calmer. The guy, now pale in his face starts to stutter: “But you looked so beautiful”

I look at him again – he’s old and fragile.

“Well, I live right over there…” he says and points to a close by apartment.

“…it’s so nice, I have a large bed where you would be so much more comf…”

“Shut the fuck up”, I stop him mid-sentence.

He goes white on his face again, still lying on the ground where I pushed him.

What’s the time? Where am I? My phone is missing, someone must’ve stolen it. I look at the old man; he looks wealthy – he wanted something else. I wonder if I should kick him. What would Jesus do? Well the accused certainly acts like a catholic so he probably already saved him a seat next to him.

I decide to just leave and get on to a taxi. I get one, say my hotels address to the driver and check the time from his dashboard: 09:40. There is a 2k tournament starting in 2 hours and 20 minutes. I lean back in my chair, the red digits in the taxi’s meter are slowly running up as we drive through the city and I wonder: All night drinking and sexually abused – is this how other professionals prepare as well?

I woke up from my thoughts at casino. Not quite feeling like playing – I guess remembering that you’ve been sexually assaulted can do that to a person – or maybe I just wanted a beer. Either way I force myself to play for a couple of hours, then convince Pampo and my other friend to join me for a “relaxed table football and snooker evening”. Naturally ended up doing shots and singing “living on prayer” to a full karaoke bar.

However, did leave my cash at the casino and woke up from my own bed.

Who says I haven’t matured?

P.S.1. It turned out that passing out on a park bench wasn’t quite as good tournament preparing as I had hoped because didn’t manage to cash that one.

P.S.2. My phone was never found but did get a phone bill for rather unreasonable 2k a month later.

KingPampo & TheJudas are streaming on Twitch, revealing their biggest wins & losses at the online tables. This is poker entertainment at its best!
Follow on twitch