Where I like to play live poker in London

“A place is only as good as the people in it.”

My go-to spots in London for live No-limit Texas Holdem (also known as the Cadillac of poker) include the following casinos:

1. The Victoria Casino (aka Vic)

I might be biased to choose the Vic as my favourite, since I won my first ever live tourney trophy there in one of their weekly tournaments. Tourneys with 100-400 £ buy-ins run quite often, and the fields are much softer than similar stakes online with 100x smaller buy-ins. The cash games run pretty much around the clock, with deep juicy £2/5 starting usually early in the evening. There are also some high-stakes action occasionally up to £50/100. Everything works smooth in Vic, and you pay rake by time collection – which is usually a lot cheaper than paying rake from each pot with a large rake cap.

A nicely decoriated casino Hippo is at the Leicester Square, and the location makes it easy for tourists to come in and try their hand at poker. Good games occur with stakes of £1/2 and £1/3.

3. The Casino at the Empire (aka Empire)

Not the most glorious casino in the world, but some of the nice deep-stacked games run
here with stakes of £1/2 and £1/3.

Tonight’s plan is to enter Hippo and get a decent dinner at some point. The good thing about live poker in London, at least for people like me who are not night owls, is that you don’t have to stay up until the wee hours – there’s always some game going in the morning and in the day time, so having a good night’s sleep is an option I usually take.

“Give me six hours to chop down a tree and I will spend the first four sharpening the axe.”

Preparing for sessions can have a huge effect on your performance. You can’t expect to play your best unless your routines support that – entering a state known as the flow can be achieved more often if you’re consistent in how you prepare for play.

Oh, what does this mean in practice? The good old combination required for a healthy lifestyle works fine here as well: Proper sleep, clean food and working out before sessions. Personally I like to go for a run – anything between 5-10km will do trick. When in London, Hyde Park & Battersea Park are my favourite places for a run: 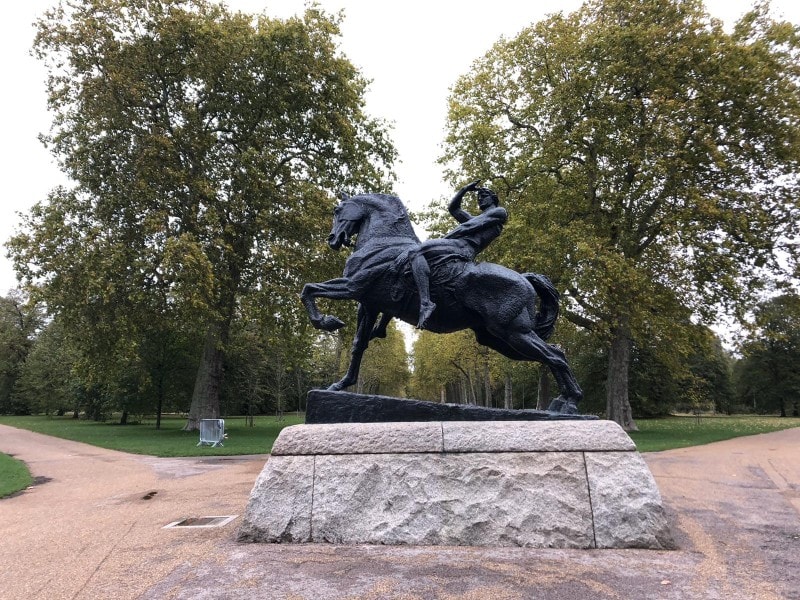 When preparing for online play, I’ve used notes of current leaks of my game as well as relaxation voice recordings designed specifically for poker. You don’t have to trust me that they can actually work:  Fedoz Holz uses them too! You can try it out for yourself by downloading an app called Primed Mind. 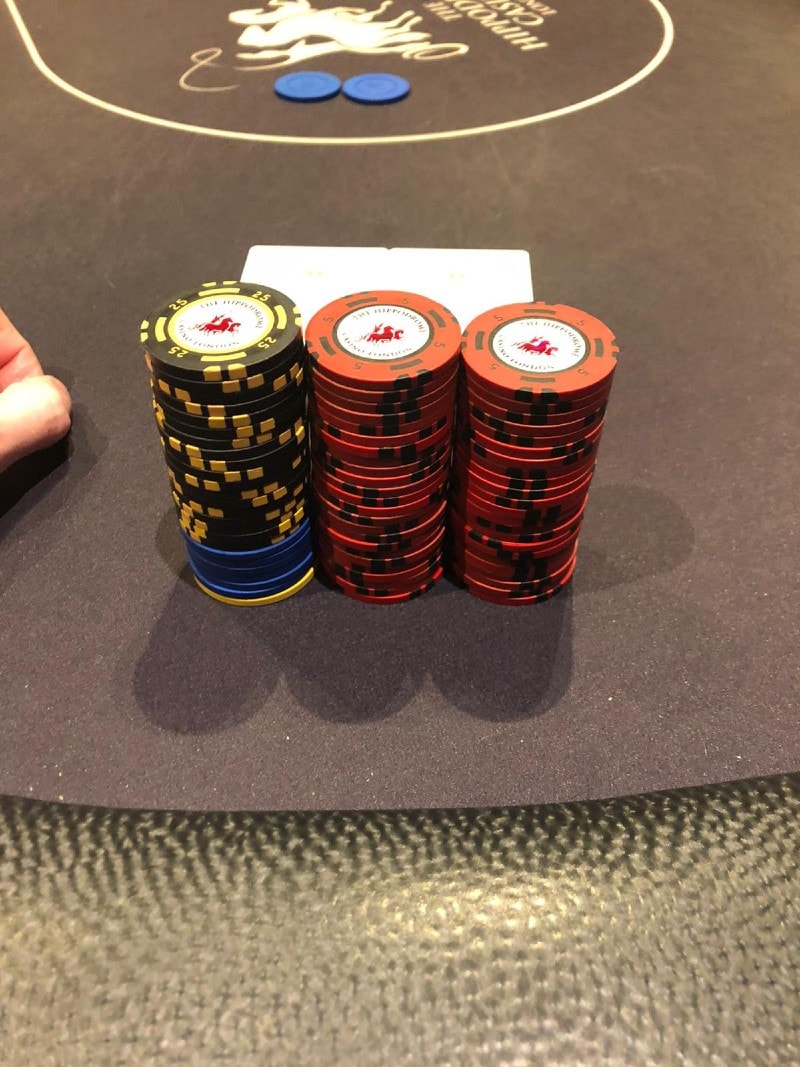 One typical live hand occurred as a middle-aged passive guy opened to 15 from UTG in a 1/2 game, another gentleman called in position and I woke up with red jacks in the big blind. We were approximately 160 BB’s deep, and 3betting here is usually bad as the guy prolly doesn’t have many worse hands in his opening range. So I call, and the flop comes J83 with two hearts, I checkraise his pot-sized bet of 50 to 123, and he goes all-in for a little over 300. Easy game they say!

Dinner break included authentic Lebanese food, and I ended up eating a massive piece of seabass: 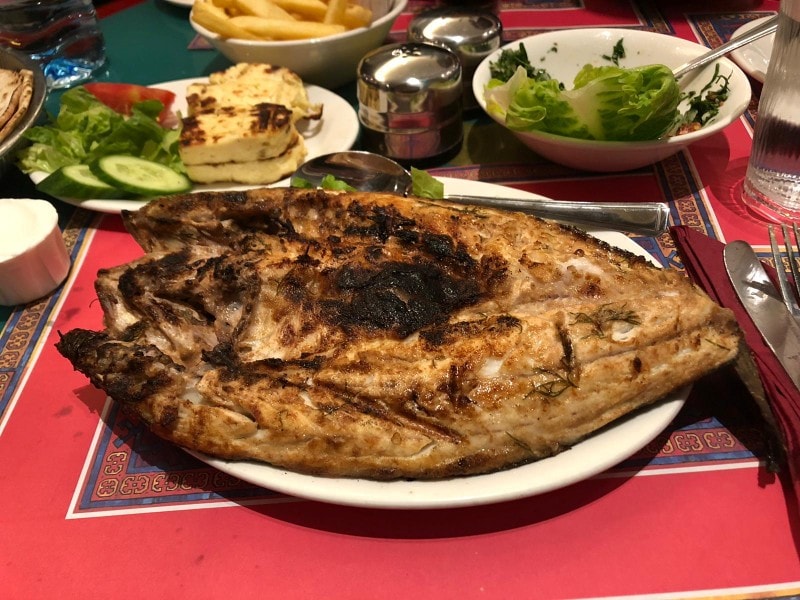 Then it was time to enter Vic, and I got a seat on the right of a guy who was obviously playing way better than your average live pro. No wonder as he turned out to be a former roommate of Linus Loeliger! One clear upside to livepoker is meeting brilliant poker minds you can have discussions with.

Anyways, soon I got a seat from a deep 1/3 game where everyone had +1k stacks and I was trying to figure out how they play. In this game, no more 3bets got through, no more isolations ended in you having the position on whoever limped and everyone else stepping out of the way. In other words, it was a bit of a crazy game. I played for around 2 more hours and then decided to call it a day.

The next morning I went straight to the Empire after breakfast, where a really nice passive table just opened around 11am with average age of +50.

How do you take advantage of that?

Isolate more. And I mean much more!

Hands like K2s, 84s, J9o become suddenly profitable isolation raises if nobody is fighting for the pots preflop or 3betting you light. Don’t worry if you get called – you can keep up aggression post flop even with a tiny bit of equity, since your typical passive opponent also plays fit-or-fold.

3bet a ton in position.

This also applies to pretty much any live game, since people either defend way too much or way too little, and they are lost postflop anyways making tons of big mistakes if they decide to call you.

Be prepared to make tough folds when facing aggression.

Being passive means you don’t raise much or bet much. But when you do, you usually have it. So the exploit is simple here, just fold your overpair when you know it’s no good against the turn checkraise from a passive guy.

The dealer at the Empire also managed to make the atmosphere quite nice at times: 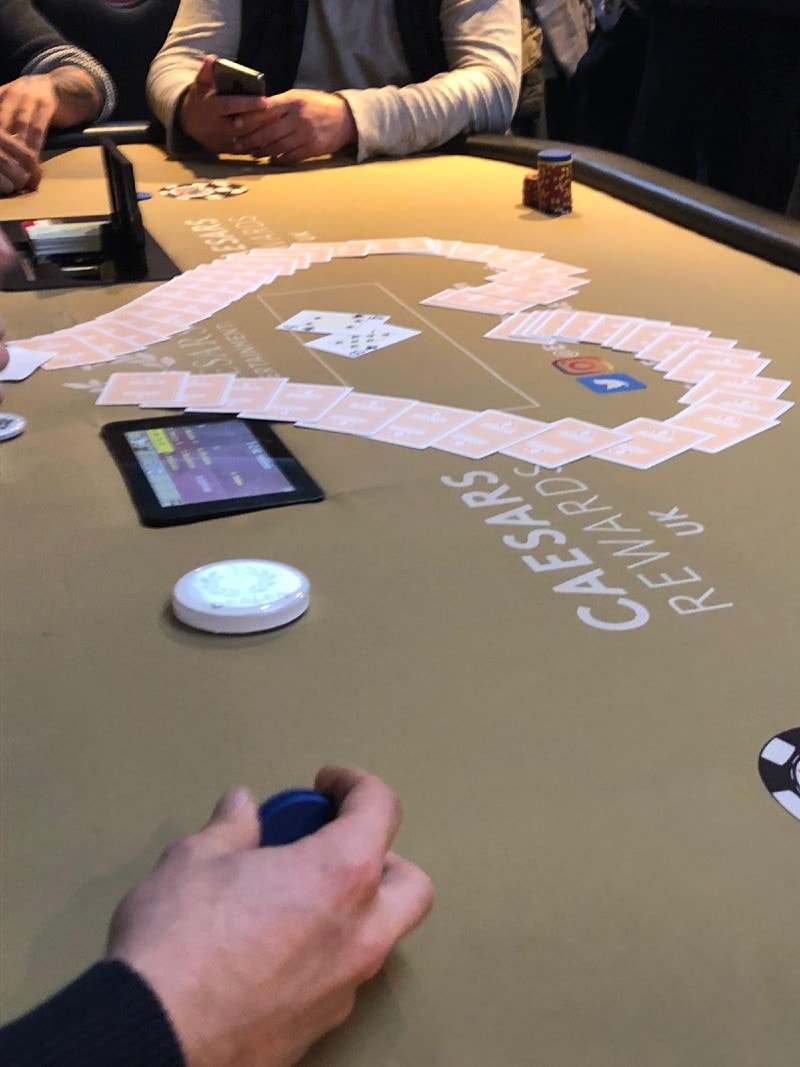 Rest of the day in a nutshell: Chinese dumplings for late lunch, one hour at the Empire and a few more hours clocked in at Hippo. The 2 tables I played at the Hippo were not that great by live poker standards. There was a nice 2/5 game running but the waiting list didn’t move at all – most people at the table were sitting between 2-4k deep, so getting a seat at that kind of table is usually a very good spot. But that didn’t happen, so a new try tomorrow it is!