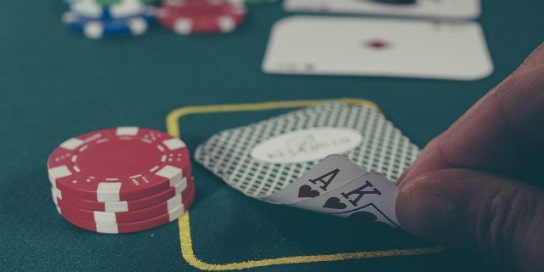 Las Vegas or “Sin City” is the land of casinos. With a plethora of options to choose from; it can get confusing to find the best tables to ‘grind’. So, where should you go to catch the best action and stakes which suit your budget?

Well, needless to say, the finest poker rooms are in the biggest casinos. In random order; Aria, Bellagio, Wynn (Encore) and Venetian should be your top picks. During the WSOP, the Rio is packed with cash game action in addition to the tournament series. Of course, there are a few smaller casinos which have good action for small stakes but we’ll keep that for a different article. In the following sections, we’ve listed the biggest poker rooms in Vegas:

Aria is the newest of the big casino complexes in the city which translates to awesome rooms, world-class restaurants and heavy footfall. Aria is also one of the key locations for poker. It’s affiliated with World Poker Tour (WPT) and all WPT tournaments in Vegas are hosted here. Aria also has its’ own Poker series named “Aria Poker Classic” where daily NLH tournament are organized, usually priced at $400.

There is a separate high-stakes poker area which compromises of 5-6 tables. The higher stakes tables with buy-ins ranging from USD 10 – 25+ organize PLO or NLHE. There is also a separate building where the PokerGo studio is located. High-roller tournaments and the “Poker After Dark” TV Show are filmed over there.

Aria also has excellent small-stakes cash game action. The smallest NLHE table has USD 1 – 3 blinds while the smallest stakes for PLO is USD 1 – 2. The USD 2 -5 tables attract a lot of action as well. They also have PLO games with the “Rock”, meaning that the winner of each pot gets the “Rock chip” which is basically a straddle that is valued at 2bb.

Bellagio is an iconic landmark for poker and home to the famous “Bobby’s Room” which is known for higher-stakes action and gorgeous interiors.

There is a lot of mixed game action in Bellagio, which really doesn’t happen in Aria that much. If you are a PLO player looking for smaller or mid-stakes action, you generally won’t find that in Bellagio. For some reason, during the World series, the only PLO game that ran continuously was USD 50 – 100 PLO. However, for NLH, there are lower stakes available; USD 1 – 3 and 2 – 5. As well as a 40-table poker room, Bellagio also has a glitzy sportsbook & casino.

The Wynn is one of the grandest resorts on the strip. The poker room might be a bit smaller in comparison to the ones at Aria or Bellagio but it has beautiful interiors to say the least. Table service is par excellence and better than Aria or Bellagio in our opinion. Wynn is also one of the most expensive resorts in Vegas, so you can find some recreational players with deep pockets here!

The Poker room is located in the Encore building which is right next to the Wynn main building. The games at Wynn start from USD 1 – 3 NLH and USD 1 – 2 PLO and go up to USD 25 – 50 for PLO and NLH. There are times when the action is even bigger with USD 200 – 400 NLH/PLO tables running. Some of the PLO games are played with the “Rock” as well.

They also have daily tournaments starting from USD 200 buy-ins. All in all, Wynn offers great NLH and PLO games and you should definitely check this place out no matter what stakes you play.

Venetian is another beautiful casino at the north end of the Strip. Their poker room is surprisingly big and they are known to organize tournaments in a very professional manner. During WSOP this year, they held their own series, Venetian Deepstack Extravaganza where buy-ins ranged from USD 340 to USD 3500. The tournaments had good guaranteed payout structures and saw a lot of players participating in multiple tourneys (mostly NLHE and a few PLO ones too). The Venetian organizes this series every month which lasts for a week.

As far as cash games are concerned, we found the action really juicy. If you’re looking for high-stakes action, the Venetian isn’t the place for you. Cash games start with USD 1 – 3 blinds for NLHE and USD 1 – 2 for PLO. Some 5 – 10 PLO/NLH tables do open occasionally but anything bigger than that is virtually non-existent. This means there aren’t that many experienced high rollers at the tables and the games are juicier with more recreational players. We would strongly recommend visiting this poker room.

Rio has been the home of the World series of poker from 2005 to 2019. It is announced that in 2020, WSOP will move to Caesar’s Palace which is another casino owned by Caesars Entertainment. The Rio Resort will be torn down and this change is probably good for players because Caesars Palace is located on the Strip with much better dining options and more enjoyable surroundings as a whole.

For the past 3 years or so, the high stakes cash game area (stakes ranging from USD 10 – 25+ for PLO and USD 50 – 100+ for mixed games) is called King’s Casino. They’re promoting the WSOP Europe event held in King’s Casino in the Czech Republic. Talking about aesthetics, the poker area looks pretty nice, there is ample space between tables and comfortable leather chairs for players. Food is also served for whoever has a seat at a table.

For some odd reason, there isn’t much of NLHE action available in the King’s area. It’s mostly PLO and Mixed games. You can also find some OFC (Open face Chinese) action.

For lower limits, WSOP has a lot to offer. Cash Games are located in the Pavilion room, which is the area nearest to the WSOP entrance. The ambiance, tables and chairs are similar to the tournament area. Dealers make mistakes from time to time, but the games are pretty juicy in general. There are NLH tables starting from USD 1 – 3 and PLO starting from USD 1 – 2. PLO is usually played with a mandatory straddle to USD 5 at the lowest limit. There is also BIG O ( 5-card Pot Limit Omaha Hi-Lo) tables starting from 1 – 2 – 5 and Mixed games and OFC action also for lower stakes. If you are a fan of these rare games, the WSOP cash area is the place for you!

Planet Hollywood is a huge casino with its own shopping boulevard and even a Criss Angel show. It is also a great place to play lower limit NLHE. There are numerous NLHE tables with USD 1 – 2 and USD 2 – 5 blinds action. Surprisingly, we didn’t see any PLO cash game action. The poker room is cozy and the quality of players is pretty bad; thus, a great place to play!

They also held their own Goliath Poker series during the summer offering mostly NLHE tournaments and a few other events. The guarantees were not as big as they were in the Venetian, but the tournament venue is a nice place to play.

Binion’s Hotel and Casino is located in Las Vegas Downtown; the old Las Vegas so to speak. It used to be the home for the World Series of Poker all the way until 2004. It is an iconic place where you get to witness the annals of poker; like the famous Poker Hall of fame with the pictures of poker legends like Benny Binion, Amarillo Slim and Doyle Brunson. The atmosphere is totally different as compared to other casinos on the Strip. It feels like you’ve taken a time machine 20 years in the past and if you’re a poker geek like us, this place is a definite must-visit.

The glory days of the Binion’s are long gone but you can still find some tournaments and low limit cash games here. The players here are generally aged and are probably playing to relive the nostalgia of yesteryear. Cash games are mostly USD 1- 2 NLH and USD 2 – 4 Limit Hold’em! If you want to take a trip down memory lane, and want to play some Limit Hold’em, Binion’s poker room is the place to be.

Poker in other casinos on the strip

There are some casinos which are worth checking out if you like playing small-stakes NLHE. The poker rooms are small in these casinos and mostly only offer NLHE tables, but the best part is that there aren’t any pros here. Therefore, the games are really soft and worth visiting. It’s worth mentioning though; in the Flamingo, you can play the smallest PLO game of the town with USD 1 – 1 blinds while drinking $1 Coronas!

We’ve listed casinos with small poker rooms below but keep in mind that they might be one of the biggest casinos in Vegas at the same time. This is only from a poker point-of-view.

While playing cash games in Vegas, download the Bravo Poker app. This app shows you the current tables running in all casinos in Las Vegas. It also shows the number of people on the waiting list. The information might not always be accurate in real-time, but at least the running tables information is spot on.

If a table isn’t running well for you, there are lots of other places to play. There are so many games for small-stakes all over Vegas that you really shouldn’t waste time on a bad table!

When you are playing poker at any table in Las Vegas, the dealer usually asks you for your rewards card. You can get this card from a separate counter in the casino. Rewards are usually worth a few dollars per hour, so if you are playing a lot, you can make remarkable rakeback from these programs. Different casinos have different reward systems. Caesars Entertainment Casinos has their card called Total Rewards, Aria and Bellagio have MLife, Wynn and Venetian too have their own rewards system. Wherever you play, make sure you receive these comp points from for your reward cards.

All in all, if you are a live poker grinder, Vegas has the most options in one city in the world. Hope this article helped. Have fun and good luck at the tables!

Henri is a Pot-Limit Omaha specialist and an expert in all aspects of poker tracking software. Henri has played poker professionally since 2009 and regularly plays the highest cash games available online.