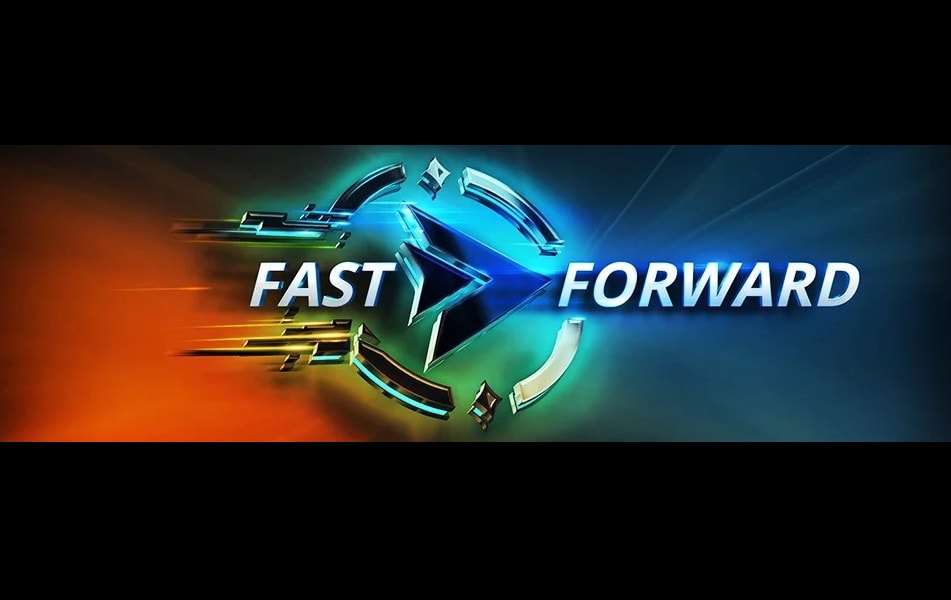 Couple of weeks ago Mr. Jouhkimainen convinced me to try out partypoker’s fast-forward tables. I had stayed away from them for the whole last year because of my 700k hands a year side bet against Mr. E (did not win that one) and at some point, party made the (imo) wise decision and banned tracking software. Even though I like their decision it made it very hard for me to track the number of hands so opted not to play there. To be fair I had the option to play there – I told mr.E that it’s annoying to pay Pokerstars over 150k+ a year and get basically jack shit and a lollipop (I think I raked over 200k last year on Stars and got back around 2k and a lot of weekly freeroll tickets). The hatred of PokerStars’ new RB program was so strong in Mr. E too that he did give me permission to just count down my playing hours on Party and “be honest about it”.

It was sometime around September and I had one of these epiphanies where I show Mr. E that I’ve played 500 hours equaling at bit over 400k hands and he would just laugh and put me on his “later” debt list.

To those who have not been around poker long enough it’s quite usual (at least in my poker group) to have a “serious” and “later” debt lists. Serious debts are made with people you don’t know that well and you pay them back immediately just that they don’t get the wrong image. To have a “later” debt list you must firstly know the other person extremely well, so they have a good approximation of your wealth and secondly the sum should be a small one to both participants. Contrary to popular belief: being in debt can actually be fantastic when the sum is small enough (in example I’m owing Mr. Jouhkimainen 67€ from a table I “stole” from him – and it will be a cold day in hell in deed when Maestro is getting that back). The problem is that to a multimillionaire, nosebleeds playing yacht-owner, like Mr. E, the sums that can go to a “later” debt list can be a bit too big for my taste.

With this great alibi I was able to convince myself to play basically only on PokerStars and ignore any other high EV games that other sites might hold. Until that chat with Mr. Jouhkimainen who reminded me that I could do 200k+ a year from RB alone if I just moved my games there – and that’s not even accounting for the winnings.

So, I decided to give the fast-forward a try. I had played some heads up at the partypoker and managed to grow my initial 6k deposit to 20k which seemed like a decent trying out bank roll for what I assumed would be mostly PLO 500 mixed with occasional PLO1k grind.  Party offers a weekly 20k GTD rake-race with 3,5k for the winner. For a degenerate like me that seemed almost like free money. So, still hungover from the New Year’s Eve I sat down in our office and started playing with one goal in mind: to win the rake-race.

Here are some of the aspects I found in my experiment: 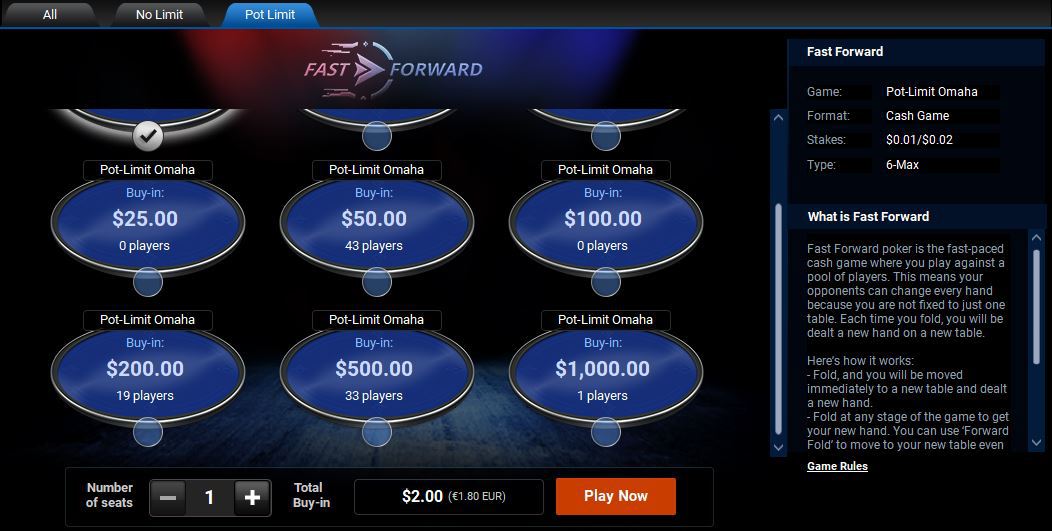 Fastness is a virtue

Party’s fastforward truly lives up to its name. In stars I was quite equipped to get away with 4x ZOOM even with some regular tables (in the worst of times even Heads up tabs) on the side, but in party I had a real problem keeping up with the hands when I fired 4 tabs open. I’d estimate that with stars Zoom pools you can rack up around 700 hands, whereas in the partypoker the hourly pace goes past 800 hands. If you put that into a perspective: you’re deciding what to do with any hand every four seconds. Now four seconds isn’t a lot, and you also have to take into account that sometimes these decisions come quite a lot faster as you have possible stacking hands in every table and you have to evaluate yourself through spots that – in fairness would take hours to calculate even with a purpose-built computer and a capable man wielding Monkersolver behind it. Because of this I did find myself from time to time almost deafened by the party’s alarms going off on four tables at the same time as I tried my best to – if by any means possible– not get stacked 5 times within a minute.

Even with some recreational players dropped in the mix – the fastforward pools must be some of the toughest games in their own respective stakes to beat. To be fair I didn’t play my best and managed still to make some EV according to the hands that I gathered from the party’s website – for some reason I only got approximately around one third of the hands that I actually played (and one weeks sample isn’t enough to gather any really valuable data anyway). However, PLO is a game that is still largely played extremely badly in these stakes and even the top regs (may or may not include me) make so many mistakes (definitely including me) that a man with good working ethics and willingness to improve their game should be able to beat the field with relatively big win-rate. That being said, a player with those capabilities will make money anywhere. 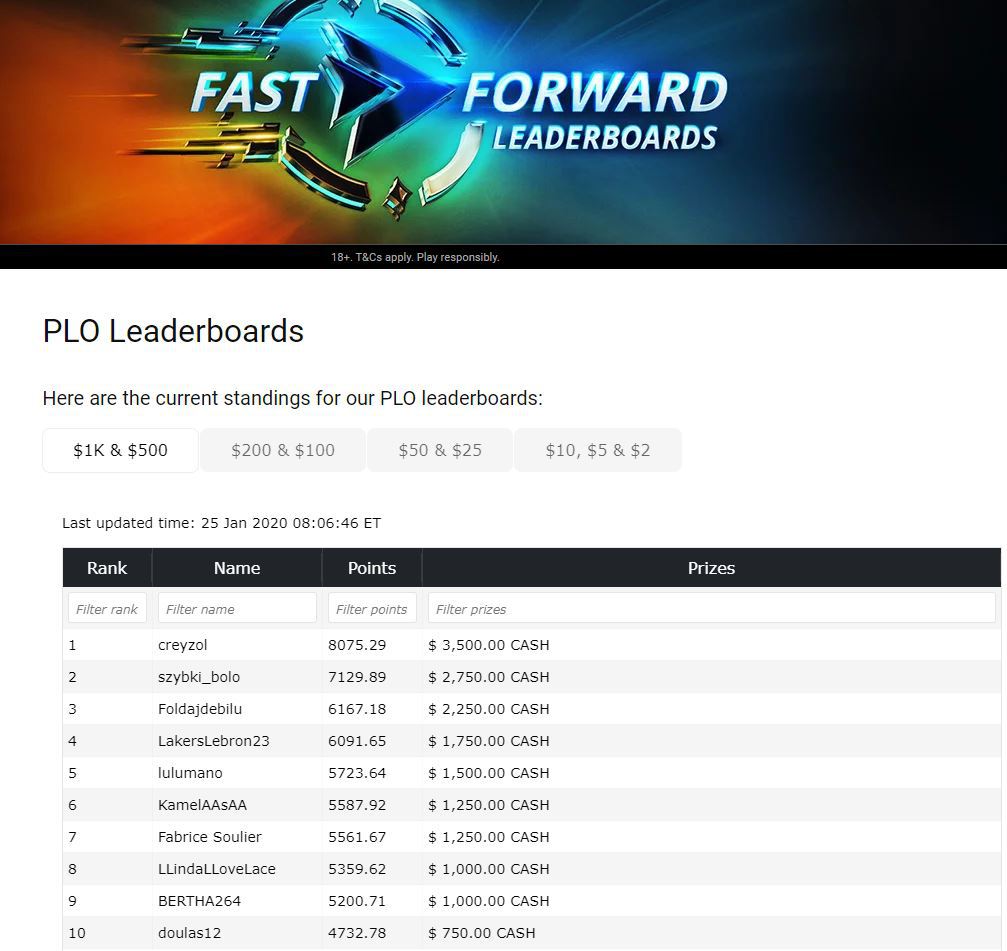 Now I thought that winning the rake-race would be a walk in the park. I thought that no one would be capable of pushing similar volume. Especially for a period of one week. For seven days I can do 12 hours a day and not go totally crazy because of it.

I was wrong. At session number four or five came one with a horrible run. I think I lost 20 buy ins in an hour. This is actually quite common as these fast games often run deep, and with deep stacks and couple of coolers or huge flips you can end up dumping 20 buy ins in no time. With this run however, came the realization that I was greatly underprepared for these games. My bankroll dropped under 4k at some point and as the 1k pool was running I was forced to drop down to three tables.

Being forced to play only three tables I lost my chance to win the race. It did make me realize though that 4 tables might be too much for me at the moment and is costing me way more in win-rate than I would be able to make in rakeback or even at the rake-race. Sure, getting 7k a week rakeback is nice but given that I just had 15k swing in a single session I ended up with a conclusion it’s not worth it. Playing more focused and evaluating your options increase your win-rate, and the bigger the win-rate, the lower the variance.

Now, even though I didn’t end netting a lot moneywise, I did find some things one might put their mind to if they want to win one of the party’s races.

Eventually I ended up losing a couple of thousands in the games and generated rake for a bit over 7k. This granted me the third place in the rake-race for 2250 dollars and 3120 dollars in rakeback. All in all, putting me around 3000 dollars in the black for the week. The fastforward games are beatable and potential gold mines for those with the right skillset. For me though? I’m not sure. I think I will keep on playing but with a bit better table selection combined with hard work on my fundamentals. Who knows, I might try to win the race again once I feel that I’m well enough equipped for the challenge… And if I were a betting man… I wouldn’t bet against it. See you at the tables! To find more about games on partypoker with comments from partypoker Team Pro Joni Jouhkimainen, check out the complete review of partypoker
This article is also published as a forum topic here »
PrevPreviousPoker Downswings
NextThe Best Poker Players in 2020Next