In case you’ve ever experienced those days when you play like you poker superstar reading everyone’s hand perfectly, taking the perfect lines and making astonishing moves are simply out of your league – have you wondered why can’t every session be like that? On the other hand, making a newbie mistake that a player of your skill level should never make, also happens frequently when you play – where the heck did that come from?

Even our Team BeastsOfPoker professionals sometimes play their C-game, which can result in losses of several tens of thousands in a single session at the stakes they play at. The reason leading to these two states of play, also known as your C-game and your A game, is how we as human beings learn things. The model of learning that best describes this phenomenon is called The Inchworm Concept, made popular by Jared Tendler who is one of the best know mental game coaches you can hire as a poker player. Now if you haven’t ever seen an inchworm in nature or a document, it’s a tiny worm that moves by drawing its hind end forward holding on with the front legs at the same time, and then advancing it’s front body while holding tight to the wood with the prolegs.

How the Inchworm Concept works

Same as in the actual movement, in The Inchworm Concept you have three different stages of learning and taking your game to the next level as a result:

Stage 1: You add a new skill to your repertoire of poker tools that help advance you’re a-game (the inchworm takes the front foot forward)

Stage 2: You fix a leak in your C-game and make it less exploitable by other players (the inchworm takes the back foot forward)

Stage 3: Your overall level of play improves as a result of stages 1 and 2, which makes your B-game stronger in general (the inchworm moves it’s who body forward)

While this concept is quite hard to explain using just words, Jared Tendler has provided a helpful picture of a bell curve graph that illustrates perfectly what’s happening: 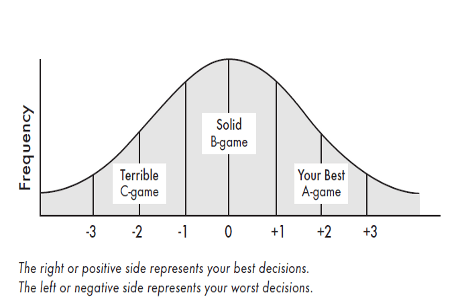 Where to focus first when working on your game

Now that you know the concept of Inchworm, how should you start applying it? With poker being such a complex game where you need to master different areas of play, it’s easy to get lost where to start first. Many sports coaches are advising on focusing on your strengths and improving them, but in poker we cannot afford to do that since we lose a LOT of money if we don’t improve our weaknesses. So, our advice here is simple:

You should start applying The Inchworm Concept on your leaks and C-game first.

What happens if you do this? Each time you find a leak and plug it, your C-game moves forward, which means that the bell-curve gets sharper instead of stretching far out wide on both ends – you don’t fall into a money-losing mode anymore, but maybe just to playing break-even. Now is that something that will put money in your pocket over the long-run? Absolutely!

What happens if you try to move the opposite end first in poker? Well, it means your A-game gets better and better, but as a result the bell curve widens so much that it stretches outside your screen at some point, which means you either play like a genius at time or like a fish. And in poker, playing like a fish will cost you money, and we simply don’t want that.

Conclusion: If you want to become a very solid player in poker, take out the most terrible decisions first, and after that you can start adding new skills to reach higher levels of A-game.

Why working on your C-game is important

With poker being a zero-sum game, whoever makes the least amount of mistakes is guaranteed to make the most amount of money – unless the game is so heavily raked that nobody wins big! Sidenote: We strongly advise staying out of heavily raked games, at least if they come without proper rakeback: Paying between 7-10BB/100 rake in the micros and low end of low-stakes is not uncommon online nowadays!

Many times the C-game mistakes happen for other reasons than you not knowing better – they are usually linked to mental game issues such as your mind going blank if there is too much pressure, fear of failure, decreased motivation after grinding for a while etc. Examples of these would be check-calling instead of check-raising due to a risk aversion and at the other end of spectrum taking overly aggressive lines on the turn & river due to believing your superior strategy can win you pretty much every pot you play. You can recognize these mistakes right after you’ve made them, but in the heat of the battle you still end up making them. Playing a bad C-game can also lead to a downward spiral, as they can create frustration and confidence problems, which can results into more C-game mistakes, and now you have loop that is hard to break.

Action point: Start identifying your C-game leaks and plugging them with a framework called The Mental Hand History (you guessed it, introduced by Jared Tendler)

Applying The Mental Hand History to fix your C-game leaks

The Mental Hand History is a very practical tool for identifying and plugging C-game leaks. This tool has 5 steps and you can apply it anywhere once you learn the concept. Here’s how you can apply it to break down an example mistake that pops up often for many players in their C-game – just replace the example by a real C-game mistake that you personally have to start practicing!

‘I’m bluffing too much on the flop with no equity when called against calling stations.’

Step 2: Explain your logic behind that problem

‘I must fire bluffs as they can’t hit every flop, for sure they must fold sometimes!’

Step 3: Figure how the logic in step 2 is flawed:

‘I’ve seen them float me both IP and OOP with a bare overcard, a gutshot and many other weak hands, and it seems they don’t easy fold. As I’m betting against them on the flop often, they can view me as an aggressive player and call me down even wider.’

Step 4: Correct the flaw in your logic

Step 5: Ask yourself why this correction will work in the long-run

‘These calling-stations will keep floating me on the flop, so I need to have hands with good equity to win against them. That’s how I can beat them in the long-run’

In case you feel like you need help with identifying your biggest C-game leaks or don’t quite know how to fix them, getting a personal 1-on-1 coaching session can be the fastest way to start improving. Many poker trainings sites offer coaching for profits programs nowadays, so you can even do this risk-free if you like!

Work on your biggest C-game mistakes first, as this will help most with your winrate. If you to get more tools for improving your mental game, we recommend reading the classic books from Jared Tendler on the topic that are available here:

Become the player you were born to be and start dominating the games – Continue reading more tips & articles in Learn Poker!